Islam is Reportedly the Second-Largest Religious Tradition in Virginia 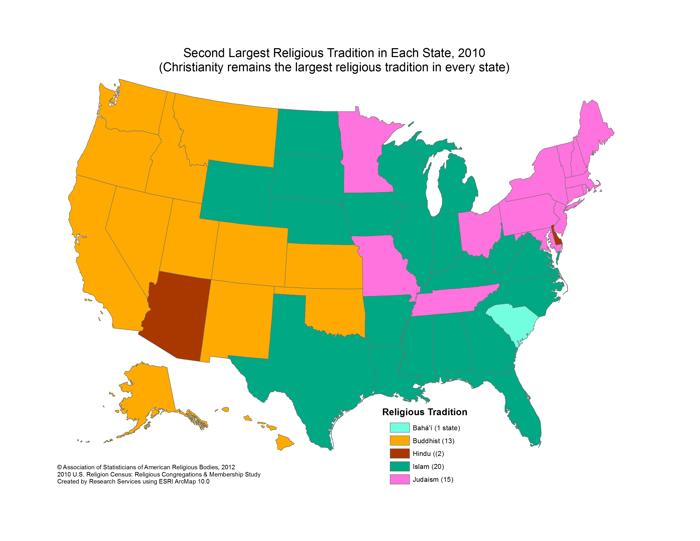 Christianity is by far the most common religion practiced in Virginia and the United States.  But do you know what comes next?  In Virginia, as is the case with nineteen other Southern and Midwestern states, Islam is the second-most common practiced religion, according to a new article in The Washington Post.
They referenced research from theAssociation of Statisticians of American Religious Bodies (ASARB), which conducts a US Religion Census every ten years.  ASARB offers a county-by-county breakdown of congregational membership. Their 2010 census is the sixth time reporting such information, with previous releases in 1952, 1971, 1980, 1990, and 2000.
However, the data is not universally agreed upon.  Some argue that the second-largest group nationally is actually those who do not identify with any religion.  And a 2008 U.S.Religious Landscape Survey from The Pew Forum on Religion and Public Life ranks Judaism ahead of Islam. The reason for that discrepancy, according to Religion News Service’s Mark Silk, is that “the U.S. Religious Census relies on reports of actual synagogue membership, and many self-identified Jews don’t belong to synagogues; while the reporting Muslim bodies provide estimates of mosque membership.”