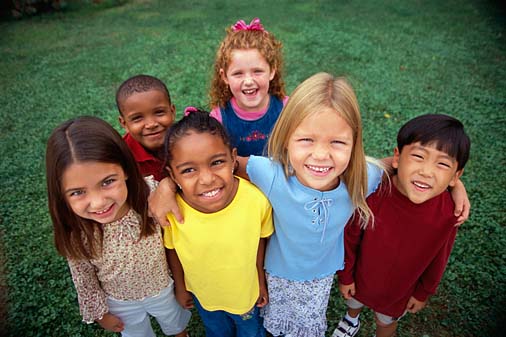 At many Virginia Center for Inclusive Communities programs, participants claim that children do not possess or act on racial biases. Sadly, a growing amount of research refutes that claim, including a new report from psychologists at the University of Virginia.
Rebecca Dore, a Ph.D. candidate in developmental psychology, recently published “Children’s racial bias in perceptions of others’ pain” in the British Journal of Developmental Psychology.  She and her collaborators asked children who were ages 5, 7, and 10 to “rate the severity of pain that they believed would be felt by other children… in different situations, such as bumping their head, or slamming a hand in a door.”
There were no differences along racial lines in the responses from 5-year-olds.  However, by age 7, white respondents rated the pain as less severe when they were shown pictures of black students compared to when they saw pictures of white children.  The data demonstrates clear bias by the time students reach the age of 10.
As a result of her research, Dore states, “Talking to children about racial issues early may be important for preventing the development of biases that could have consequences in adulthood.”  She adds, “If we want to prevent this bias from developing, it needs to be done by age 7, or age 10 at the latest.”