The following message was written by Jonathan C. Zur, President & CEO of the Virginia Center for Inclusive Communities on September 27, 2015: 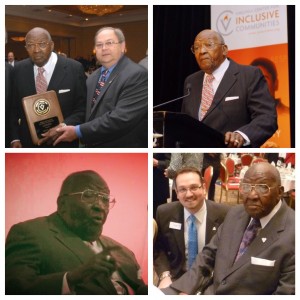 Dear Friends of VCIC,
With great sadness, I write to share the news that Dr. Allix Bledsoe James passed away overnight. He was 92 years old.
Over the course of his life, Dr. James served in a number of capacities at Virginia Union University, including student, Professor, Dean, Vice President, President, Chancellor, and President Emeritus. In the community, he cumulatively served more than 50 organizations in his 92 years. He was the first African American person elected President of the Virginia State Board of Education, first African American person elected President of the Association of Theological Schools in the United States and Canada, first African American person elected to a corporate board in Virginia, and first African American person elected to chair the National Conference of Christians and Jews, among many other distinctions.
We are so fortunate that Dr. James was involved in the work of the Virginia Center for Inclusive Communities (formerly the Virginia Region of the National Conference of Christians and Jews) for more than five decades. He is an emeritus member of our State Board of Directors, represented the Virginia office on the national NCCJ board for several years, and he holds the distinction of being the first person to receive two awards from our organization: Dr. James earned the Humanitarian Award in 1975, and he was presented with the Jeffrey B. Spence Award for Interfaith Understanding when that recognition was created in 2009. Dr. James was also a leading force and substantial contributor a decade ago when VCIC became an independent nonprofit organization in Virginia.
In 2013, I had the honor of interviewing Dr. James at The Valentine as part of a series marking the 50th anniversary of the VCIC/NCCJ Humanitarian Awards Dinner. At that event, he spoke about his life, and specifically his memories of Richmond in the 1960s. That conversation was recorded on video and can be viewed at the following links:

Quite simply, it is impossible to put into words how much Dr. James has meant to this organization, to our region, to our Commonwealth, and beyond.
Funeral details will be announced shortly. Dr. Jeffrey B. Spence, past President & CEO of the Virginia Center for Inclusive Communities, will be one of the preachers.
May Dr. James’ example inspire us all to work ever more diligently for understanding and respect.