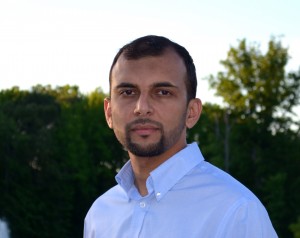 A series introducing the individuals who promote and lead the Virginia Center for Inclusive Communities’ work.
Q
asim Rashid’s work to bridge divides started long before he became a member of the Virginia Center for Inclusive Communities’ Richmond Chapter in 2013.  An accomplished attorney, author, and speaker, Qasim has received many awards for his outreach and advocacy during his time in Virginia.  He has been described by CNN at “…an effective source on a wide range of religious issues.”
In his most recent publication, an opinion piece in Time Magazine titled “Debunking the Extremist Myth that Islam is Anti-Jewish,” Qasim condemns advertisements that were placed on the sides of public buses in Washington DC.  He argues that “…certainly some Muslims are anti-Jewish, as are some Christians, agnostics, atheists—you get the idea. However, nothing in the Qur’an or in Prophet Muhammad’s example supports the myth of ‘Islamic Jew hatred.’”  He then offers a range of well-researched and documented arguments to back up his claim.
Qasim’s article offers just a sampling of the larger arguments he makes in his new book,“EXTREMIST: A Response to Geert Wilders & Terrorists Everywhere,” scheduled to be released at the end of May.  This text follows his first solo-authored book, “The Wrong Kind of Muslim: An Untold Story of Persecution & Perseverance,” published in 2013.
Perhaps U.S. Senator Timothy M. Kaine, a 2000 Virginia Center for Inclusive Communities Humanitarian Award recipient, says it best when he writes that “In his adopted home of America, Qasim Rashid has experienced stereotyping and discrimination as a Pakistani-born Muslim. In his native home of Pakistan, Rashid and his family are subject to persecution because their Ahmadi Muslim faith is considered heretical by many in the Sunni Muslim majority. Rashid’s heartfelt story compels admiration for him and a deeper appreciation for America’s guarantee of religious freedom.”